This will be exciting! Appearance at the Brisbane Writers Festival
with Garth Nix, Amie Kaufman and Jay Ktistoff! 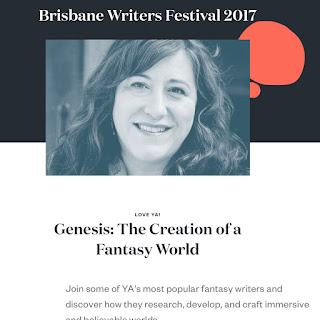 No blog here for me, today (I promise, a blog about the launch is coming soon!) But I have blogged on my publisher's website, all about the experience of winning the TEXT Prize. Here:
https://www.textpublishing.com.au/blog/writing-and-researching-mediaeval-fantasy-and-demons-interview-with-the-2015-text-prize-winner
By Kimberley Starr - October 19, 2016 No comments: 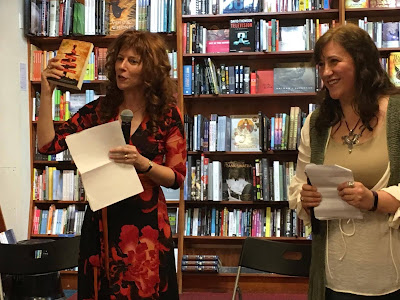 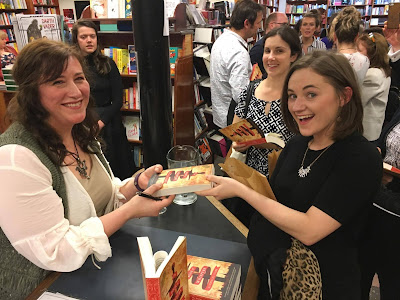 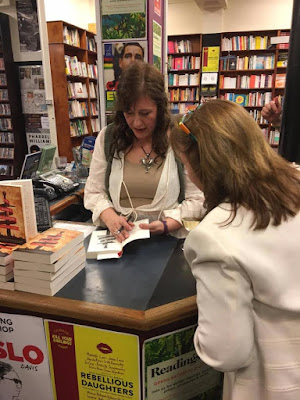 Demons: why are they so hard to define? 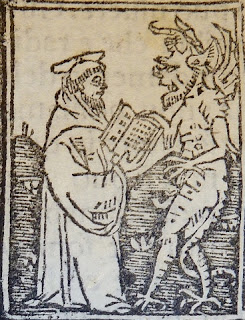 The Book of Whispers is about a young knight who has to defeat demons and save the world so I had to spend a lot of research time not only brushing up on my historical knowledge of the Crusades but also on researching what demons are.


Not an easy subject! so here's my first demon list:

Reasons it's hard to write about what demons are:

Firstly, they are tricksters, always trying to lead a  too easily distracted writer astray.

Personally, nothing has ever frightened me more than the Japanese film Ringu, inspiration for the American The Ring series  (featuring a demonic video tape).


Thirdly, and this is the big issue I had to work out in drafting The Book of Whispers: are they real or are they metaphoric?

In other words, do demons physically exist, or do they represent something psychological and maybe even scarier?


·       The metaphoric is hard to resist. Freud connects demons to the recently dead, to what I would call ghosts. The Baha’i faith, that I first learned about while travelling through Israel researching this book, sees demons in a metaphorical way. They represent evil characteristics a person can display when tempted. Plato says a daemon of a different type inspired Socrates. This is a different kind of demon to the fallen angels who were my first concept.

So how did I decide what Luca’s demons in The Book of Whispers would be like? The answer to that in another post. . .

It's nerve-racking, waiting to discover what readers will make of your story. So I was thrilled by this review:


The Book of Whispers is a fascinating blend of history, romance and fantasy set against the backdrop of one of the most turbulent, brutal and religious periods in our history. Luca and Suzan are compelling characters who draw you into their epic adventure across the holy lands as they try to save the world from the human and demonic forces seeking to destroy the world. An engrossing read for ages 14+.

I've been writing about demons in The Book of Whispers, but this put me in mind of an earlier literary fascination of mine... Vampires. 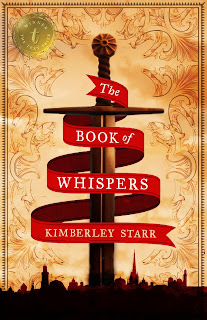 What monster does the word vampire conjure for you? A cloaked creature who hunts by night, with sharp fingernails and sharper teeth? Do you see eyes glittering with menace? Or do you imagine a sexy movie star with a perfect body, clear skin and a serious, soulful gaze?
While vampires might be condemned to walk eternally in the black of night, right now they are red hot. Stephanie Meyer’s Twilight series of books and movies have been viral hits. Young Adult book shelves groan under the weight of super-sized paperbacks from vampire series like Richelle Mead’s Vampire Academy  and L.J. Smith’s Vampire Diaries.  (Do teenagers read anything else?)
Then there was the cult TV show True Blood, based on Charlaine Harris’s Sookie Stackhouse series. There’s even a rock band - Vampire Weekend. Vampires’ coffins have never been far from sight – but there are more of them than ever. What explains the popularity of our fanged friends? 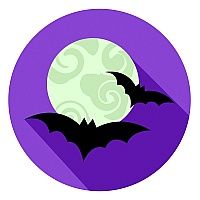 Let’s face it, vampires have never done what they’re told. They refuse to eat their veggies. They stay up much too late. They’re meticulous about not crossing thresholds until invited, but once in, they’re after a fix of blood. Our blood. Vampires frighten us.
The Australian author Mudrooroo wrote a trilogy of vampire stories beginning with Underground, where a white woman vampire acts like an invader. Bram Stoker’s Dracula brought the vampire firmly into English novels. But long before them, the figure had its hold on our imagination. When Charlotte Bronte’s Jane Eyre met the madwoman escaped from Mr Rochester’s attic, she described her as “savage... the roll of the red eyes... the lips were swelled and dark… the black eyebrows widely raised over the bloodshot eyes... it reminded me... of the foul German spectre--the Vampyre."
But that was then. Nowadays…

2. vampires are charming.
Charlotte Bronte didn’t like Jane Austen’s fiction but the writing of both seems to have eternal life. Recently, Elizabeth Bennet came close to meeting her sad end in book and film versions of Pride and Prejudice and Zombies, and now, one of Austen’s other heroines meets her match in Emma and the Vampires. But Emma’s Mr Knightly, of course, is modern and charming as well as being a blood-sucker.
These days, vampires are nurtured and desired. Women love them. A vampire partner might be asleep when you want to go shopping but at least he’ll never lose his hair - or get paunchy. Blood must be healthy – vampires seem able to control their food intake the way they control other impulses. Twilight’s Edward Cullen doesn’t just desire Bella sexually – he actually wants to eat her. But he doesn’t. Ah, for self control! That’s just another way that

3. vampires are strong.
Vampires don’t die. Anne Rice wrote Interview with the Vampire while depressed after her child’s death – and the child who cannot die, the vampire Claudia (played beautifully by Kirsten Dunst in the otherwise dreary film) is one of her most memorable creations.
While we fear blood because of what it threatens – injury and death – vampires literally suck it up. Like bushfires and cyclones, like Hurricane Katrina which destroyed one of their favourite hunting grounds – New Orleans, Louisiana (Interview with a Vampire and the Sookie Stackhouse books) – they are a force of nature. But… 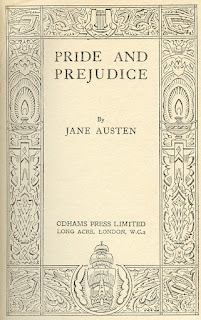 4. vampires are romantic.
It is a truth universally acknowledged that a single vampire in possession of eternal life must want a woman to protect. This is as true for the undead in New Orleans as it is for vampires in high school.
Yes – for all the adults who read it on trains on the way to work, Twilight was originally published for teenaged readers. It was one of the first assaults in the supernatural takeover of Young Adult shelves. A decade and a half ago, Buffy the Vampire Slayer proved that a girl can care about her formal dress and about saving the world. Then, The Vampire Diaries features a dark haired girl torn between two supernatural loves. It would seem like a Twilight rip-off were it not based on a trilogy published in 1991. Vampires spend a lot of time at school! It’s a good thing sunlight won’t destroy them, after all.
There has always been something sexual to vampire tales. Dracula was furious when Jonathan Harker killed one of his Brides – and seduced Harker’s fiancée to the dark side in revenge. Laurell K. Hamilton’s Anita Blake series creeps closer to erotica with each installment. The vampire still comes by night. Is enthralling and powerful. Entices his prey to something dark and illicit and at the same time absolves them of blame.
All of which brings me to the question; what do vampires mean? Fear or desire? The answer seems to be that they’re big, dark, inkblot tests. They can mean – and can be – anything we want. Perhaps that’s why we love them so much.

(An earlier version of this article appeared as "Bite me" in Good Reading Magazine, April 2011)
By Kimberley Starr - September 26, 2016 No comments:

I was so excited to open the email that contained the full cover flat for The Book of Whispers. It's hard to explain just how exciting for a writer it is to see a visual representation of a world that used to exist entirely in words.

The Book of Whispers will be in book stores next month :) 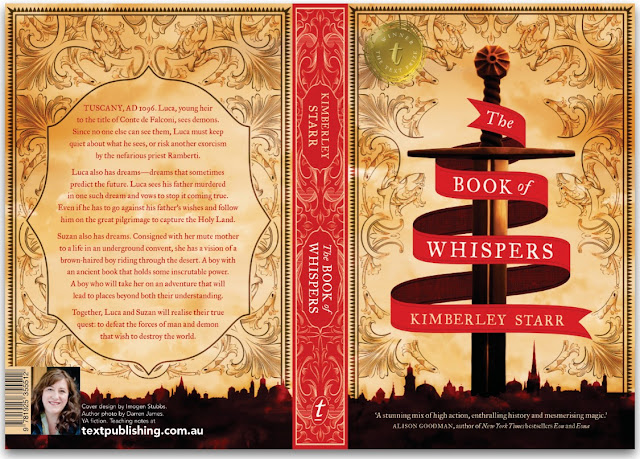 This will be exciting! Appearance at the Brisbane Writers Festival  with Garth Nix, Amie Kaufman and Jay Ktistoff! 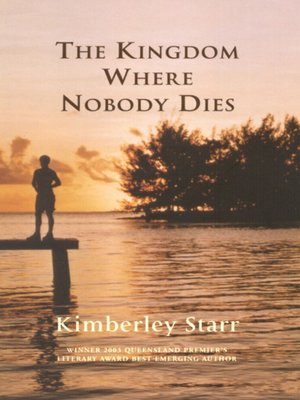 The Kingdom Where Nobody Dies

The Kingdom Where Nobody Dies

Twenty years after the first boy vanished along the Brisbane River, psychologist Madeleine Jeffries is called home to help untangle a chain of similar disappearances. To do so she must confront secrets and guilt from her own past. The Kingdom Where Nobody Dies is an exploration of grief, responsibility and repercussions, and the way childhood actions can echo throughout our lives.

'A clever, compulsive story of mystery and intrigue...The work sparkles with small, stylish gems of literary accomplishment that give great pleasure. Kimberley Starr has a strong voice and a keen sense of humour.'
"the novel both delights and surprises... rich with actions and situations that pose tantalising moral questions" Good Reading
"Starr does a fine job in nostalgia, evoking mangroves, a meandering river and tropical weather to create a time and place" The Courier Mail
"keeps readers guessing to the end... a promising debut" The Australian
"a gripping psychological thriller... an award-winning story of passion and mystery" Woman's Day
"ambitious ... written with an undemonstrative assurance, so that it hardly reads like the work of an author in the early stages of a career" The Canberra Times 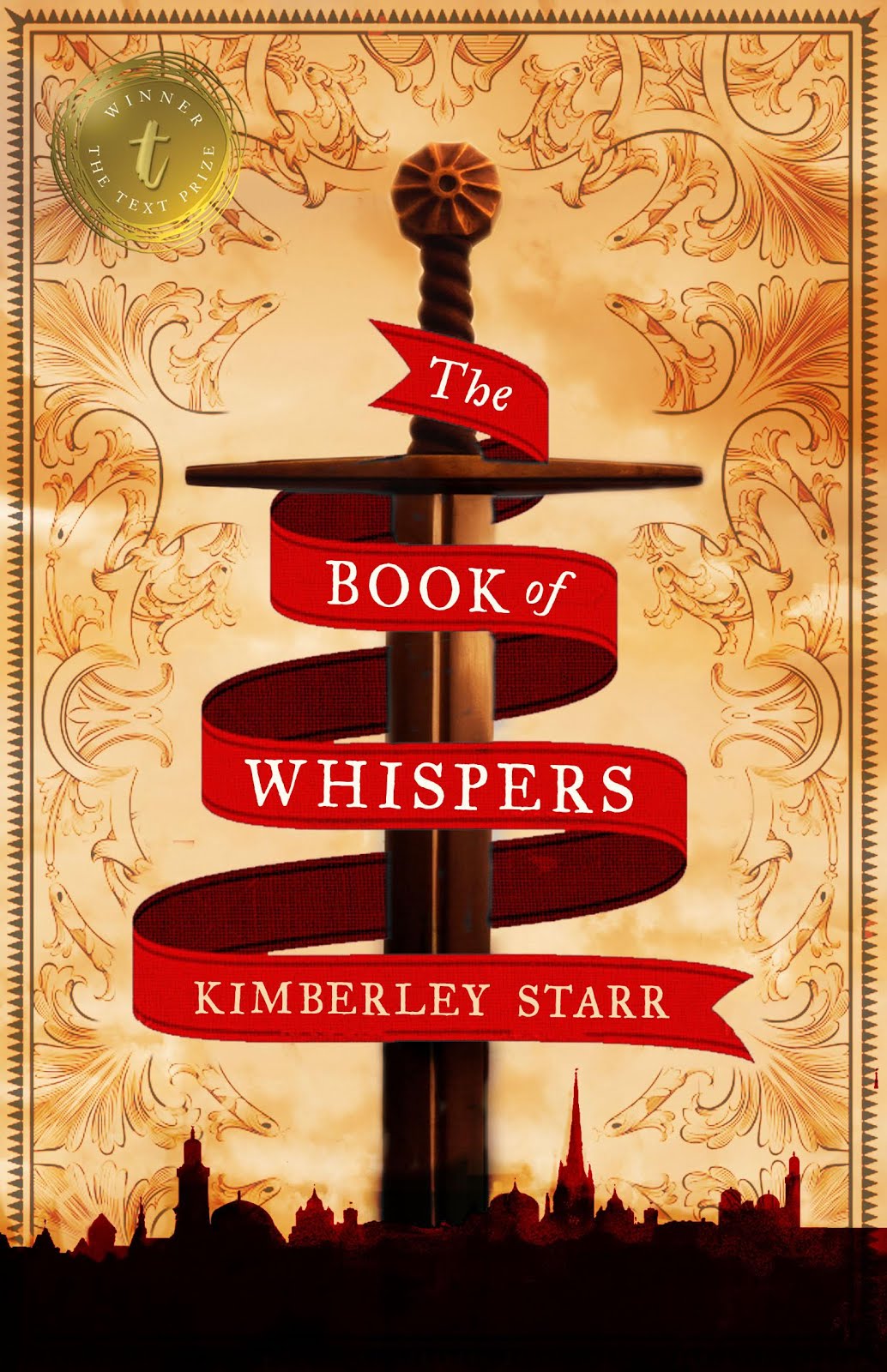 The Book of Whispers

Kimberley Starr's most recent novel, The Book of Whispers won the TEXT prize for Young Adult writing and has been described as "a heart-stopping adventure ride through a world populated by demons, both real and figurative. It’s about goodness and doing right and, above all, love."

Her first novel, The Kingdom Where Nobody Dies, won the Queensland Premier's Literary Award for best emerging author in 2003 and was popularly elected for the city-wide reading program, One Book, One Brisbane in 2005.It was also shortlisted for the Dobbie Award for the Best First Novel by an Australian woman Writer

Kimberley has an MA in medieval literature. Her writing has appeared in various newspapers and journals including The Griffith Review, The Age and The Courier Mail.

She currently lives in Melbourne where she teaches English at Viewbank College, and works on her next novel.